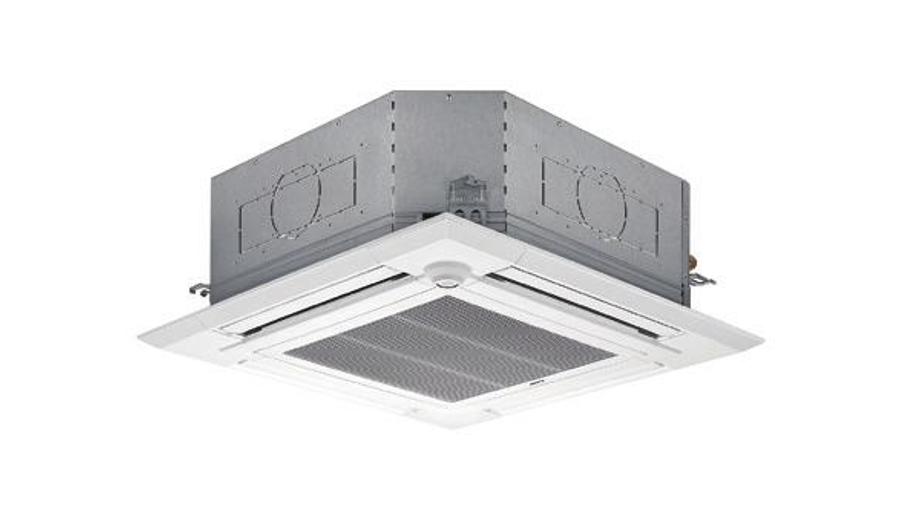 For users seeking even further energy savings, Mitsubishi Electric now offers deluxe units (PLA-ZM) to complete the line-up of models in this series, from 35-140.

Rating of more than 7.0 achieved for all capacity range. 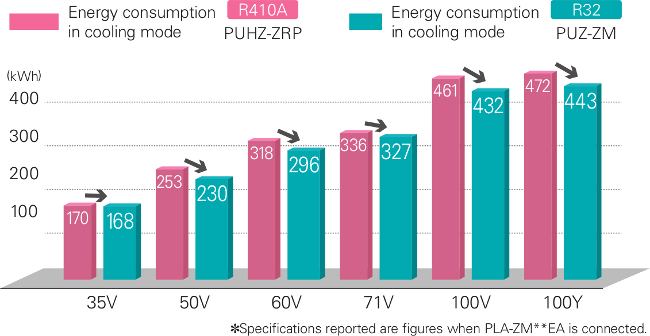 The new airflow control removes that uncomfortable drafty feeling with the introduction of a horizontal airflow that spreads across the ceiling.

The ideal airflow for offices and restaurants. 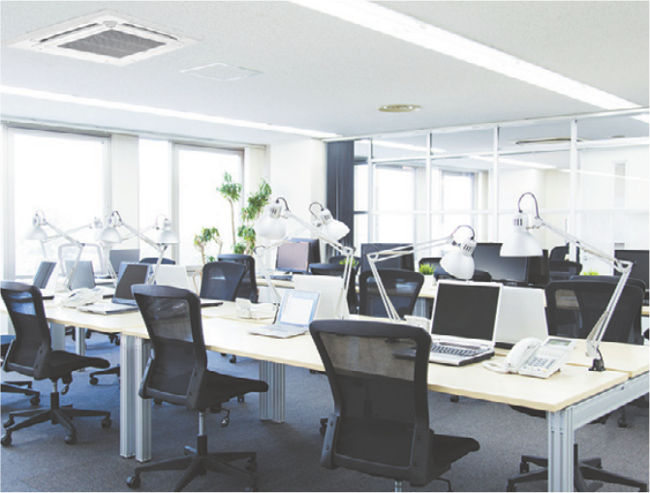 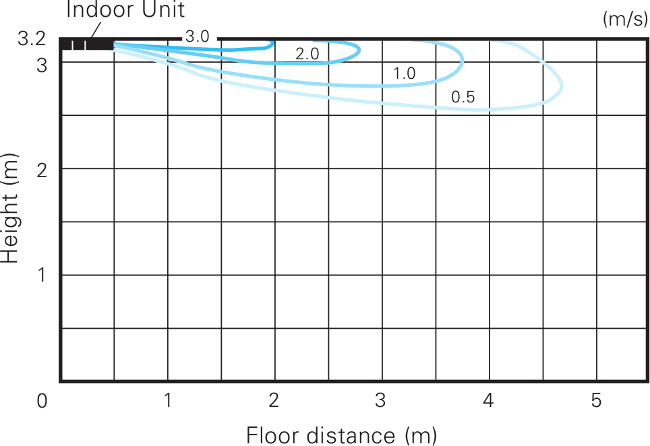 Special wired and wireless remote controllers can be used to lower the intake grille for maintenance. 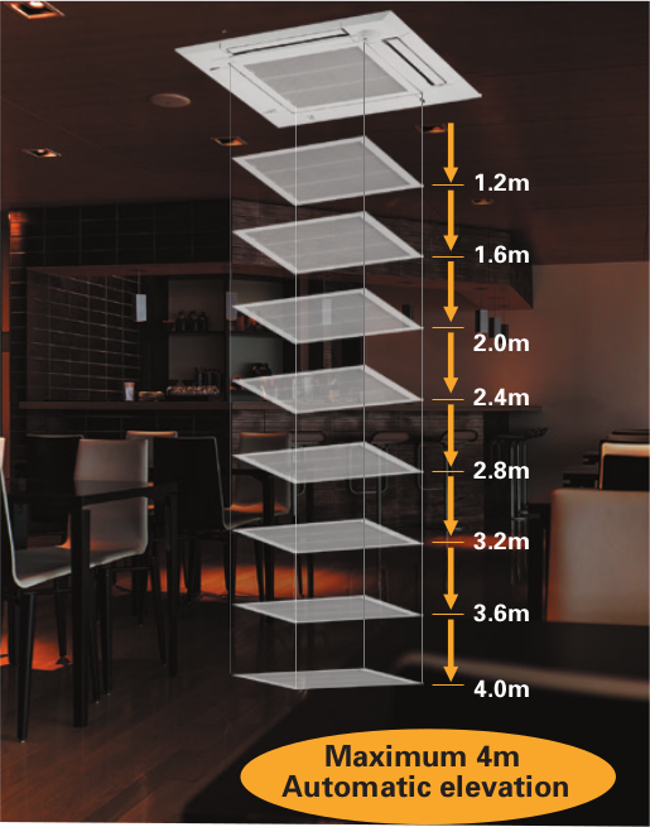 After reviewing the power supply terminal position in the electrical box, the structure was redesigned to improve connectivity.

This has made previously complex wiring work easier.

The top and bottom positions of the liquid and gas pipes have been reversed to allow the gas pipe work, which requires more effort, to be completed first.

Further, through structural innovations related to the space around the pipes, the area where the spanner can be moved has been increased, thus improving liquid pipe work and enabling it to be completed smoothly.

The structure of the panel has been revised and is now equipped with a temporary hanging hook.

This has improved work efficiency during panel installation.

No need to remove screws

Installation is possible without removing the screws for the corner panel and the control box, simply loosen them.

This lowers the risk of losing screws

After reviewing the structure and materials, weight has been reduced approximately 20% compared to the previous model, reducing the burden of installation.

3D i-see Sensor detects the number of people in the room and sets the air-conditioning power accordingly.

This makes automatic power-saving operation possible in places where the number of people entering and exiting is large.

Additionally, when the area is continuously unoccupied, the system switches to a more enhanced power-saving mode.

Depending on the setting, it will save additional capacity or stop operation altogether.

Once the position of a person is detected, the duct angle of the vane is automatically adjusted in that direction.

Each vane can be independently set to “block wind” or “not block wind” according to taste.

The 3D i-see Sensor detects the number of people in the room.

It then calculates the occupancy rate based on the maximum number of people in the room up to that point in time in order to save air- conditioning power.

When the occupancy rate is approximately 30%, air-conditioning power equivalent to 1°C during both cooling and heating operation is saved.

The temperature is controlled according to the number of people.

When 3D i-see Sensor detects that no one is in the room, the system is switched to a pre-set power-saving mode.

If the room remains un-occupied for more than 60min, air-conditioning power equivalent to 2°C during both cooling and heating operation is saved.

This contributes to preventing waste in terms of heating and cooling.

When the room remains unoccupied for a pre-set period of time, the air conditioner turns off automatically, thereby providing even greater power savings.

The time until operation is stopped can be set in intervals of 10min, ranging from 60 to 180 min.

Some people do not like the feel of wind, some want to be warm from head to toe.

With the 3D i-see Sensor, it is possible to choose to block or not block to the wind for each vane. 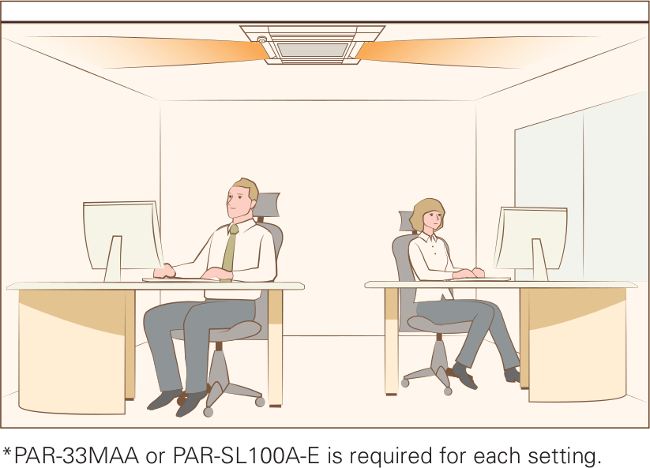 Saves energy while keeping a comfortable effective temperature by automatically switching between ventilation and cooling.

When a pre-set temperature is reached, the air conditioning unit switches to swing fan operation to maintain the effective temperature.

This clever function contributes to keeping a comfortable coolness.

The air conditioning unit automatically switches between circulator and heating.

Wasted heat that accumulates near the ceiling is reused via circulation.

When a pre-set temperature is reached the air conditioner switches from heating to circulator and blows air in the horizontal direction.

It pushes down the warm air that has gathered near the ceiling to people’s height, thereby providing smart heating.